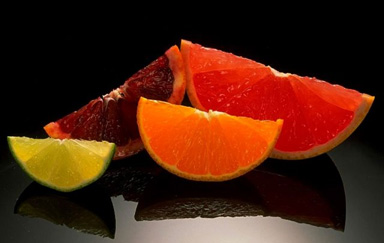 The grapefruit diet was invented by a team of doctors working at a Norwegian university hospital. You could say, that it is quite a nice diet, because the value of daily calories consumed in it ranges from 1300 do 1700 calories, and as the doctors from Oslo say themselves, The grapefruit diet allows you to shed all the way 4 kilograms in two weeks! It is also worth adding, that this diet should not be used for more than two weeks, because instead of losing weight, we can expose ourselves to exhaustion of the body due to too little calories and nutrients. First of all, that's why, that it contains lots of vitamin C and beta-carotene. Vitamin C is responsible, among other things, for lowering cholesterol levels and significantly facilitates reaching the state of sobriety then, when we happen to drink too much alcohol. Moreover, it also has an energetic effect. It is also worth paying attention to other ingredients in grapefruit, which are water and plant fibers. They fill the stomach perfectly, therefore, thanks to them, we do not feel hungry. Besides, they have almost no calories, therefore they work to our advantage. First of all, we should give up salt in favor of herbal spices. Salt is responsible for keeping water in the body, which means that the effects of weight loss are simply weaker. In addition, we should set aside the fat when cooking meat, not prohibited in the grapefruit diet. It is also worth paying attention to a rather unusual recommendation from Norwegian nutritionists. It is about the amount of fluids consumed. Not enough, that we find a lot of water in the main ingredients of the grapefruit diet, in addition, we should eat more than the traditionally recommended two liters a day. Oslo nutritionists even talk about three liters. The menu of a person following the grapefruit diet is quite nice, because apart from grapefruits and their juice, she may eat the corn flakes, lean meat, Oatmeal, graham rolls, fruit yoghurt with cereal grains, pasta, spinach, lettuce, rice, tomatoes, chicory and wholemeal bread. In addition, we can also afford milk, bananas, apples, canned peas, carrot, paprika, kefir, sir topiony, eggs, radish, onions, Garlic, wheat bran, Brussels sprouts, and even coffee, which is not often allowed in diets. In addition, our menu may also include crispbread, green beans, cheese, asparagus, sausages, homogenized cheese, beets, kajzerki, Chinese cabbage, potatoes, majonez light, jam, lean white cheese, pears, broccoli, grainy cheese, green beans, seler, honey and chives. Certainly yes, because the yo-yo effect threatens every person, which, after completing the slimming treatment, return to previous eating habits. Therefore, after finishing the grapefruit diet, it is worth becoming interested in a fully balanced diet, adapted to our diseases and needs. We should also remember about physical exercise, that will allow us to keep our dream figure.