How to serve corn gruel? 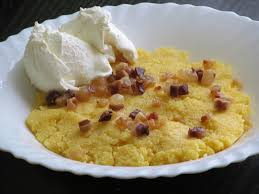 The gruel has a smooth consistency and is more pleasant to taste, so it is used as the first grain product. Due to its own smoother cohesiveness, mums often give it to younger children in a bottle with a teat.. Mostly rice or corn gruel is used. The latter is extremely easy to digest, it is less allergenic, so it is from him that the supplementation of the baby's diet with cereals should begin.

For whom the gruel?

The gruel is perfect, when we want to gradually start developing the child's diet, which until then had been fed only with a liquid meal. It is an excellent dietary supplement and a great transitional meal, before we start giving the baby solid meals. Thanks to it, the child can quickly get used to the semi-fluid density. In addition, corn gruel provides a feeling of satiety, greater than the milk itself. So it will also work as a late food, if we wish, so that your own child sleeps better at night and wakes up less often.

Namely, the gruel differs from the porridge only in terms of cohesiveness. You can thicken the milk with a gruel, for example, when we want to start supplementing our diet, while his own child knows only liquid or, when we care about it, so that the little one sleeps longer at night, before going to bed, we feed it with a bottle. The gruel quickly penetrates the nipple with a larger hole, worse is served with a spoon. Meanwhile, it provides a higher feeling of satiety, rather than the milk itself. Rice or corn gruel can also thicken broths and vegetable soups.

The gruel equals a healthy belly?

Both the rice gruel and the corn gruel are extremely similar in taste. There is no superior flavor in them, what he could trigger, that the gruel will be rejected by the child. The differences in taste between them are actually small. Article, from which they were made, namely, rice and corn, they evoke, that they are perfect for these children, who may or may have food hypersensitivity to gluten. Undoubtedly, children who do not deal with hypersensitivity will also get a taste for them. The next important thing is this, that they have easily digestible sugars, which guarantee the proper metabolism of meals in a small tummy.

The gruel is available in jars

Now we're a bit pampered by the manufacturers. We will find, for example, ready-made articles in stores, which are in many ways simple to make. Undoubtedly, the gruel can be mixed with water or we can also prepare the gruel with milk. At the start it should be changed milk, and just after the right period, cow's milk should be introduced. The pastes are extremely simple to make. What's more, they are also very good. The gruels can be given to the child with fruit, which allow you to explore the tastes.