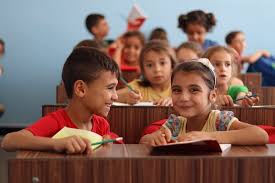 Changing schools is a serious challenge and a great change in the life of every young person. Of course, we parents also experience and reflect, jak nasza pociecha poradzi sobie w nowym środowisku i zupełnie nowym otoczeniu. You know, that every new important event, it carries an element of uncertainty, fear and sometimes even fear of the unknown. Adults feel it - why shouldn't a child not? new school, new colleagues, new friends, … All beautiful, nice, but… different and unknown.

This year me, Life has written just such a script for my husband and our daughters, therefore, I would like to share with you my insights on this subject. Since February, When we decided to change schools, to this day we are trying to plan the day to the present situation. The beginnings are always sleepless, but taught patience because she levels mountains, We try to get the last button done with small steps.

Therefore, the first day at a new school can be extremely stressful for a child, especially, if he joins a group of close people. Although there is no golden mean, which would help one painlessly "slip" through this period, you can only help minimize this stress.

If it is possible for the child to attend the old institution until the end of the school year, then everything should be done, in order not to rush decisions and thus save the stress of acclimatization to the new class, in the middle of the year. Following this thought, we made a decision, that our kids will start a new stage of education with the new school year and that is why we transported them to the old school throughout the second semester of the second grade.

This is important because of this, that the new school year is a new stage for each student. Matters from the previous class no longer mattered, like two months earlier, and so many new things happened during the holidays, that the group begins to live something else. After a break, it is easier to make changes, e.g.. related to the neighborhood in the bench, likes or dislikes. At the beginning of the year, enrollments for interest clubs and other extracurricular activities are created, and classroom functions are assigned. An example is one of my Daughters, Oliwka, which was chosen, by voting in a forum of a new class, for its president. The fact of being nominated for such a position in the new class will certainly increase her self-esteem and make it easier to enter the group, which she will now represent at school. Karolinka missed a few votes, but he is glad, that if not she, then the sister was elected to the post :). I see, that such small successes, they strengthen daughters and become an antidote for easier and more gentle acclimatization to the new environment.

Changing schools is a process, who matured consciously in us parents and subconsciously in children. The decision was made after an analysis of the arguments for and against, as the balance tilted towards changing schools, we began planning the move from the most important to the least important. We started the first shy talks about changing schools in May and by the end of the summer holidays with some breaks it was the topic of "number one" in our house, shop, car and on vacation ... The girls naturally experienced the separation from the old class and school, that's why we tried to talk to them often about it. We argued, that you will be closer to school, you will be able to walk, you will get to know more children from the estate, you will go into communion with children from neighboring houses ( because it's just third grade). We gave them time to get used to the thought. I o dziwo po pewnym okresie nastawienie dziewczynek zmieniło się o nie do poznania. They accepted all conversations with calm and understanding, which was comforting and uplifting for us parents. Dodatkowym elementem wpływającym na zmianę nastawienia do nowej sytuacji naszych pociech, there was a meeting before the holidays with a new class and getting to know the children and the leading teacher. Our daughter was received very warmly at that time, przy wielkiemu wsparciu Pani Dyrektor z tejże szkoły (may there be more such teachers). This meeting was certainly a great help for the daughters, when they had to start the new school year in a new school after the summer holidays.

Based on my own experience, I will share some tips with you, które powiedzą na co zwrócić uwagę przy zmianie szkoły przez nasze pociechy: