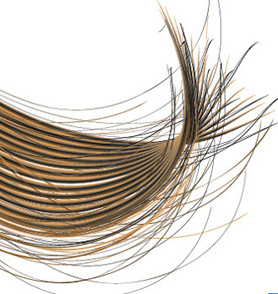 If you want gorgeous hair, you do not have to undergo expensive and complicated treatments. Just take care of them. find out, what they like. Avoid it, which is harmful to them. Just get to know them better.

Why hair can be called a health barometer?

The concentration of mineral elements in the hair is fifty times higher than in the blood. Laboratory testing of a handful of untreated and undyed hair allows us to find out what dose of a given element is in our body. Chemical analyzes of the hair showed, that the inhabitants of Łódź have much more lead in their bodies, and the Zakopane people of copper, than people living in other regions,
You can read it from the hair, how their owner ate, is he an alcoholic, whether he had been ill before.

How does magnesium affect the condition of the hair?

This element directs hundreds of enzymatic processes in the body. Its deficiency causes, that's beautiful, healthy hair loses its shine and begins to fall out. Unfortunately, Poles usually suffer from a lack of magnesium, the shortages go back 50 proc.!

What can be read from the hair?

After examining Napoleon's hair, scientists concluded, that the source of many of his ailments was an excess of the treacherous antimony. An analysis of the hair of the German playwright Georg Buchner ruled out this thesis, that the cause of his death was poisoning with arsenic, In his body, however, a high dose of toxic lead was found.

It is also worth adding, that hair analysis is increasingly used in forensics,

From research by Dr., Walsh follows, that the criminal was more aggressive and dangerous to the environment, the more his hair contained cobalt.
Not all go bald equally. Research shows, that intellectuals are more prone to irretrievable hair loss, people who work intensively mentally,
Based on observations, Europeans and Americans show a greater tendency to baldness, the smallest are Asians and Africans.

Hereditary gray hair
This is not a joke. Gray hair may be genetic. It was also noticed, that dark hair is prone to graying, but the people of the East hardly turn gray, French women are convinced, that manganese can protect against early aging.

To dark-haired women of the Antilles (And the countries of the subtropics) usually thick, strong, with a beautiful shine, the hair is not threatened with premature gray hair, nor excessive hair loss.