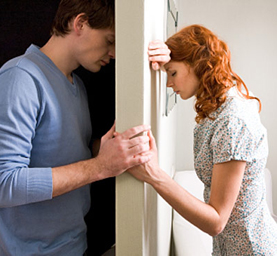 Many of us do, that people with opposite temperaments will never form a compatible and happy couple. Do the spouses' opposing advantages and disadvantages actually threaten their love??

Temperament is a combination of traits, with whom we all come into the world. We inherit it from our parents. Most people are unaware. how much influence it has on our behavior. Stands out 4 basic types of temperaments.

Read the characteristics below. Try to find your counterpart among them and the temperament of your partner. Perhaps you will understand more easily then, why sometimes it is so difficult for you to adjust to each other.

Sangwinik- it's warm, full of optimism, a man enjoying life. He is guided by his feelings rather than common sense when making decisions. He succumbs to all emotions very easily. He also has a remarkable ability to be happy, and his openness makes, that others are influenced by his mood. He likes being with people. Because he can share joys and sorrows with them, he never lacks friends. Its biggest drawback is weak will and lack of discipline.

Spitfire- he is an excitable man, quick, active, strong-willed. Self-sufficient and very independent. He is happy to give opinions and decisions about other people. Action brings him great joy, and obstacles never alienate him. It is not easy for him to be sympathetic to others. Compassion is hard to come by. He is often disgusted, seeing the tears of others, usually it is also insensitive to their needs. He gets angry easily: slams the door, he pounds his fist on the table. horns. He can maliciously and consciously cause pain to others, however, it is difficult for him to be gentle and kind.

Melancholic- it's sacrificial, talented; very sensitive man. Easily succumbs to mood swings. He likes people and wants to be loved by them very much. However, he shows great restraint when making contacts – will. for someone else to make the first move. Planning some activity, can perfectly predict difficulties. Unlike choleric, however, he does not trust, that he can overcome them. He likes to devote himself to others. If any matter requires personal involvement. he immediately joins it and then he is ready to make many sacrifices.

Phlegmatics – it's satisfied, easygoing, never annoying man. He is so composed, that it seems, that nothing can trigger real emotions in him. Underneath the cool one, the restrained mask, however, often hides a lot of passionate feelings. And because he also has a great sense of humor, easily recruits people. He avoids taking any action like fire – always looking for excuses. He is selfish by nature, making, that he doesn't just indulge himself, but he is also indifferent to the needs of others. He never screams, does not argue, he can, however, be very stubborn. His steadfast demeanor combined with his calm, a passive lifestyle often irritates the environment.

Are the similarities favorable?

According to psychologists, marriages of people of the same temperament do not bode well for the future. We do like people with similar character traits, but only in the short term. For example, two happy sanguines are unlikely to stay together for long, for each of them would probably try to prove themselves better than the other all the time. Also, two choleric people should never become married. Is it possible to imagine two equally fierce?, aggressive people, living under one roof? They probably wouldn't have lasted a day without an argument! And two phlegmatic? Would they find enough energy in themselves, to organize the family properly and take care of the children? The life of two melancholies would also be difficult. Their inborn pessimism and criticism could quickly kill even the greatest love.

Who should marry whom

When we meet someone with the opposite temperament, it usually makes a big impression on us. We are attracted to people with advantages, which we lack. Two people with opposite characteristics also have the best chance of a successful and lasting relationship
– say psychologists, at the same time pointing to two ideal combinations of temperaments in marriage:

One is a born conductor, likes to make others happy. The latter often falls into pessimism and needs someone, who will make him happy. So, even though they both have contrasting features, however, they complement each other perfectly.

First – dynamic, full of energy. loves to lead someone. The second is calm, possessed, passive, prefers to submit. That's why they both need each other and they complement each other perfectly.

But don't worry, if you and your partner do not make any of the combinations listed above. Each couple can adapt to each other and feel happy in their marriage – if he really wants to.