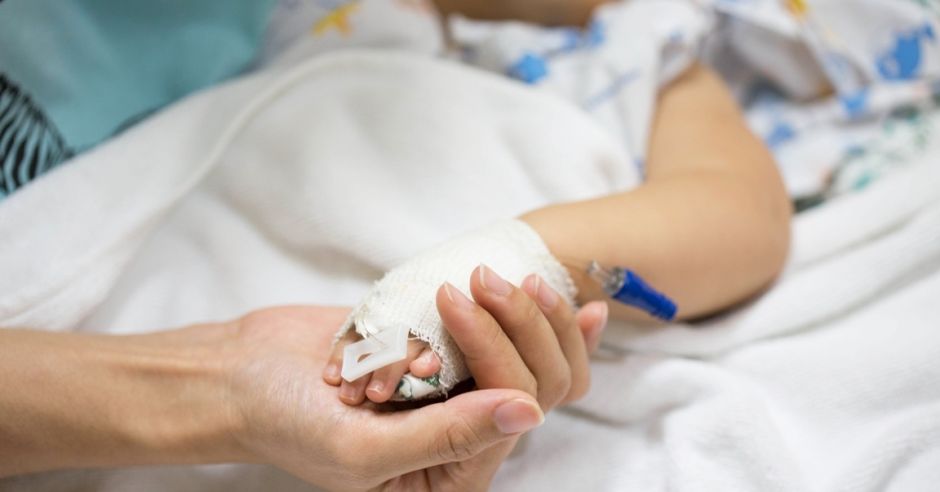 A child in a hospital with a parent - how to survive ?

Last week we had the "pleasure" of sleeping in the hospital, in the pediatric ward.
Children are a bit whining, sometimes they cry, but they sleep more often and are just bored.
On the other hand, the parents ... only and exclusively for her.

For food. At the nurses, doctors. On the creaky bed.

For the lack of toys for children. On curved walls.

Every second says - "I can't stand it mentally".

I started to wonder what was going on. I am happy, that they gave me a half and clean sheets, that I can order a dinner for PLN 5, that I can make myself a cup of tea, and most importantly - that I can be with a child who is sick!

The same fish paste for breakfast for the third day in a row ? You do not want, then don't give it to your child, there is a shop downstairs, buy a bun, jam and stop whining. Take care of yourself.
The bedding doesn't suit you? Bring your own from home. Don't yell at the nurse, when this one brings you a pillowcase with a small hole.
Etc..

Parents with a child in the hospital - how they are doing ?

Mommy, do me good
A two-year-old drinks cold cola after each meal, eats all kinds of Kinder products between meals - candies, chocolates. Mother refuses every time, when the cook arrives with dinner.
He explains to me in the evening, that she wants the child to experience her hospital stay well, so she lets him eat sweets. Normally he doesn't eat sweet at all. Hospital food is hideous and won't give it to your baby. I did not know what to say. I was silent.
My little one ate everything the hospital offered him. I didn't have to feed him with anything. I had no feeling, that I have to buy him chocolate, to make him feel better. It never occurred to me, because he was enjoying it, that I am with him, that I sleep at night next door, that he is not alone in a strange place. The child perceives the environment slightly differently than adults.

Laptop, tablet, smartphone - a necessary good
I was terrified and I wanted to cry myself, when Fr. 23 a one-year-old girl could not sleep. She was so hysterical, that they had to give her sedatives. And the crying started around 19. You can imagine ?
She was crying so hard, that her clothes were soaked in sweat.
During the day she watched fairy tales. The computer was in her crib all day, images flashed continuously on the screen. When she started crying in the evening, her parents forcibly pushed her laptop, saying: "Watch a fairy tale".
I admire them for their patience, because they didn't show up for four hours, that they are upset. But I didn't see the terror either, as if they had similar actions with evening falling asleep every day.

I love chaos
The mother of a little girl who was less than a year old showed something, what I would not expect from a woman in my life.
She had several large water bottles on the cupboard, cola, sweet drinks - each fresh. Plus a few plates of food: on one nibbled sandwich, on the second core and a few grapes, on another potatoes from yesterday's dinner. Documents, magazines, baby crayons, non-drip, bottles, three types of milk. Could be exchanged endlessly. Fear to think, what she had in the cupboard. Her baby girl had two large boxes of toys. In the middle of the day, all the toys were scattered on the floor. During the round, the doctor went berserk and started calling her a mess. You think, that she cleaned up ? The husband was smarter, because he had at least put everything in a row.
But this is not the only case. People going to the hospital take way too much stuff. The halls are really small, it is often necessary to share these tight spaces with several parents and their children. It's sad, that most people have deep repetition in others.

And how are they supposed to endure it mentally, since they are constantly worried about the hospital conditions and the misfortune of the child ? Bądź, hug, read fairy tales, love and don't think every morning: "Maybe they'll let us out today". I would be crazy. Anyway, after a few days the mood of other parents started to infect me and I was losing my patience and with me the child began to show signs of nervousness. It doesn't do any good, and it certainly does not let you recover.

Fortunately, we're already home and I don't need to see this nativity scene. My heart is not broken, when a mother screams at her baby, because it made a thin pile. I don't have to be polite to my neighbor, who grumbles from morning to night how bad it is. I don't have to clench my teeth, when the nurse grunts at me, because I assume in advance that I am like the others. The medical team is rude. I know why - because parents of young children got used to it.