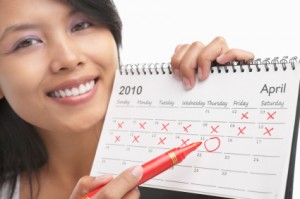 The ovulation calendar is one of the oldest methods of pregnancy prevention. The principle of its operation is this, that the woman refrains from sexual intercourse during the days considered fertile, while she can have safe sex then, when the menstrual cycle enters the infertile phase.

However, the ovulation calendar, often found under the name of the marriage calendar, bases its calculations of fertile and infertile days on the assumption, that a woman using this method menstruates regularly every day, in addition, it is healthy and resistant to any external factors, which may in some way disrupt the natural endocrine cycle.

Ovulation calendar - for whom ?

So women, who can use the ovulation calendar without fear, there is, in fact, very little. According to statistics determining the effectiveness of contraceptive methods, for every hundred women who use a marriage calendar as the only safeguard against pregnancy 15 do 40 women become pregnant. So it is not a method with a high level of security. The ovulation calendar method is earlier, several months of observation of the course of monthly cycles.

For the same number of cycles, the calculations are simple, because you only need to subtract the number from the cycle length 20 i 11 - the results obtained in this way will mark the first and last days of the fertile phase. But then, when the cycles varied in length over the months, two of them are selected for the calculation, the shortest and the longest. A number 20 is subtracted from the shortest cycle, and the number 11 from the longest cycle. It can be seen, that the fertile phase calculated in this way is longer than the fertile days determined with regular cycles. This difference comes from here, that with irregular cycles, an additional safety margin must be taken into account, because we don't know for sure, whether your next period will come sooner, or later. In other words, the calendar method in women with irregular menstruation means a lower level of safety and longer periods of sexual abstinence.

Ovulation calendar and other methods of preventing pregnancy

Among other things, these reasons are the reason, for which the calendar method is increasingly being replaced by other natural methods, for example, the Billings method, thermal method, the symptothermal method or the Creighton model. The methods of contraception mentioned are also completely natural and rely on careful observation and knowledge of your own body, however, they require a lot of discipline on the part of the woman, because it is then necessary to perform certain activities (measuring temperature, cervical mucus examination - fertile mucus) every day, at the same time and under certain conditions. Despite its inconvenience and low effectiveness, the calendar is appreciated by these women, who do not want to use artificial contraception based on hormones - the pill, IUDs or patches guarantee almost 100% protection against pregnancy, but their use has some side effects, such as the change in body weight, headaches, excessive sleepiness, decrease in libido, the body's intolerance to the hormones taken.

Accurate documentation of key symptoms each day of the cycle requires a lot of work and self-discipline, but it will also allow a woman to get to know her own body much better. Observations and calculations should be conducted for a minimum of six months, because only then will the results reliably reflect the course of the monthly cycle. A special computer application is a helpful tool for conducting such observations, which allows you to save your daily test results, and thus temperature measurements, the condition of the cervical mucus, breast soreness, menstrual and ovulatory bleeding and any other symptoms associated with each phase of the cycle (mood drop, somnolence, excessive irritability, headaches and abdominal pain). Based on the entered data, the application can generate simulations of the course of the future cycle and the duration of the next menstruation.

Calendar method - additional use
The calendar method is also a good way to plan your family enlargement naturally. Woman, who wants to get pregnant, she should have intercourse especially during the fertile days, because only then does it have a chance of fertilization. Knowing your own monthly cycle will make you predict, when is the next fertile phase, and which days are fruitless. When deciding on an ovulation calendar, you need to remember about it, that it should take into account personal predispositions and expectations. To, that the ovulation calendar works as a fully effective method for some women, does not mean automatically, that another group of ladies can use them with equal success.

Article found through the following phrases: